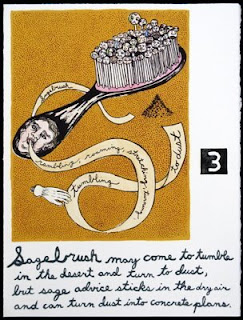 Mr. Kip will be showing his latest series of prints titled “Alasktic” at H&F Fine Arts in the Washington D.C. area.

“Alasktic” portrays the pleasure and the strain of travel on the mind and body. The series is comprised of fifteen prints produced between 2006 and 2008. The prints fit together to form a narrative about travel beginning in Mexico and ending in Alaska.

This project was initially inspired by Utagawa Hiroshige’s 1834 print series, “53 Stations on the Tokaido,” which depict scenes along the famous eastern sea road in Japan. For the contemporary viewer, Hiroshige’s prints function as a virtual trip allowing one to imagine what once was. Secondarily, the expeditions of Meriwether Lewis and William Clark inspired “Alasktic,” along with John Steinbeck’s Travels with Charlie and lyrics by Woody Guthrie.

The goal of this project was to create a pictorial and verbal overview of an imagined journey. The first and last prints in the series represent literal and figurative edges of the American territory.