Skip to content
The following are my offerings for the last day of the Facebook art challenge. Two of the works were created because I was tempted by a commercial for the Roto Zip. The commercial made it seem like you could cut shapes in wood as easy as cutting paper with scissors. Initially I wanted to cut shapes out of wood for relief prints. However, while at a residency, I became intrigued by the shapes of the scraps from my collage work. Putting the best scraps together, I decided to recreate them in wood. This is the only time I used the Roto Zip. However, I had many fun outings to Lowe’s while making these sculptural paintings.
I called the scraps “Stuffing” and the first work has this as the title. Also included is a work in progress view of Stuffing. The second image uses the the leftover shape from cutting out the “stuffing”. It looked to me a bit like Great Britain and I had liked Billy Bragg’s song “New England”. I particularly liked the song because of the way he said “a new England” rather than “New England” (another place altogether). This is a simple but big difference. So my piece is titled A New England.
The last work shown here is a drawing/ painting where I use the shapes from Stuffing. It is titled Spring Training.

Lastly, I nominated Marcus Howell for this challenge. Marcus and I hung out and made prints for three years at the University of Illinois 1998-2001. Marcus’s work is often dark, but he is a skilled draftsman and printmaker who has a distinct perspective about social justice that he applies to his narrative work (also see Sue Coe). Those that are corrupt or suffer from vanity do not escape their moral short comings. Below I am pictured in front of one of his printed works.

Originally on Facebook, the theme of this challenge was characters I either invented or further developed. There was a requirement to post 3 images of artwork a day for five days and end by nominating another artist to do the same. However, two of the images I had shown were previously documented in the post “Phil Poppin and the Return of Mr. Wisor”. In this case I will feature the third image, which was Sophia.

While the name Sophia is associated with wisdom, additionally this was my grandmother’s name. Upon reading about Sophia, I found that for those that do not understand wisdom Sophia takes on the appearance of a haggard old woman where as her beauty becomes more apparent for those who understand wisdom.

Next, I nominated artist Walter Andersons for this art challenge. In 1997 I drove out to Chicago for the first time, Walter was among several people that saved me. I had very little planned. Walter, barely knowing me, spent a free day with me and took me around town in style.

Below is a post card I have kept pinned to my bulletin board since 1999. The front features one of Walter’s paintings. Andersons’s art often features meticulous studies of photocopied source material (often art related or text). This study then gets coupled with an abstract background. In this case painting ienlivens what one may consider a degraded source (i.e. the photocopy) that may be a reproduction several generations from its source. Walter’s paintings offer qualities and observations that are both reflective and altogether new. Fragments are amplified and given new room and life.

I am glad to see that Walter now has a website where images of his paintings are studiously archived.

FacebookTweetEmail
My Facebook art challenge day 3 featured performance art. This work was not made specifically to be exhibited. The drawing/painting/collage was made for the joy of seeing possibilities. The work presented here had holes cut in it, and the holes become planets, worlds, or vistas that can be seen as it is held up. I took the drawing outside, clowned around a little, and had pictures taken of me with it. Along with the planet drawing, is a ball of paint I have been building and liken it to making a planet. It is built like a snowball from my leftover acrylic paint. The last image here is likely what inspired the others. It is one in a series of fifteen prints. It includes a circular etching made on a plate that Sharon Massey gave me. Who wouldn’t want to make a circular etching if you were given a cut copper plate?

Below are the four images I posted for the challenge (I needed an extra image of me clowning around). 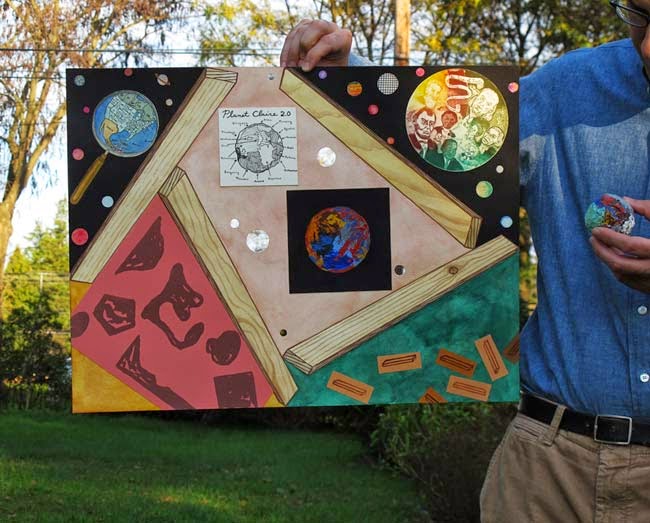 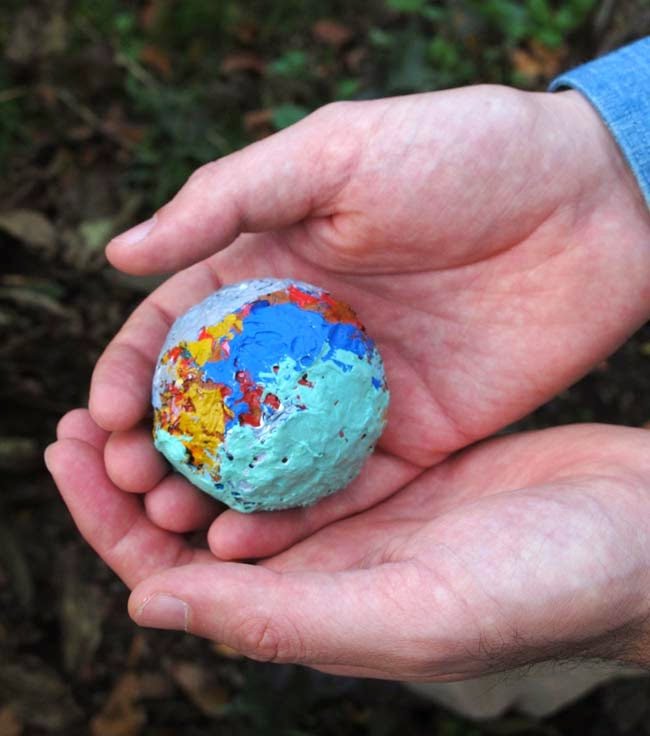 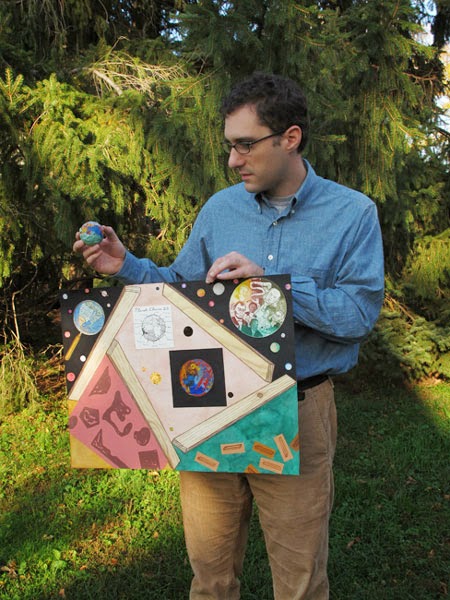 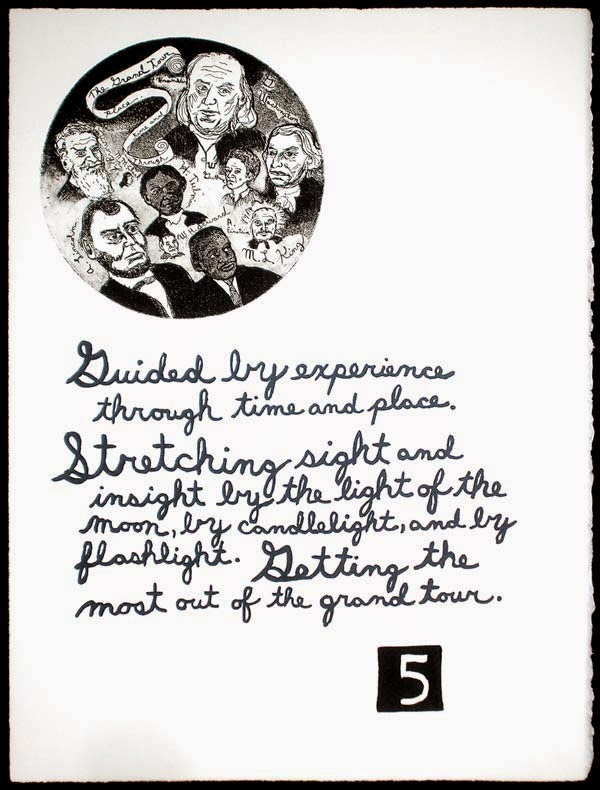 As a part of the challenge, I next nominated Richard Barlow as well as metals artist Kit Burke-Smith. Although these artists have yet to take up the challenge, below is an image by Barlow and here is a link to a recent interview with Burke-Smith (Kit is also on Etsy).
FacebookTweetEmail
Day two of my Facebook Art Challenge (post 3 images a day for 5 days) featured large collage works. Two of the works depict a boat I had named the Arkadelphia (named after a street I passed in Alabama, I later created a little story about it’s history). After making the first image with a series of black and white printed portraits, I later wanted to try printing the figures in color and created the second image.
The third image included was a portrait of Goethe after a sketch by Johann Heinrich Wilhelm Tischbein. I learned a lot making this image. Tischbein’s drawing wonderfully captures Goethe in a private moment. It functions the way a sketch does best (i.e. getting to the essence quickly). However, when interpreting the image I had to decide wether or not to make corrections (I was not sketching). I fixed the perspective in the chair and in doing so I think the drawing lost some freshness and became more mechanical. That being said, all the other information I added created a new realm, one that I think Goethe would appreciate.
Next I nominated Rachel Welling to participate in this illustrious FB challenge (3 images a day for 5 days). I met Rachel at the Vermont Studio Center in 2003 and I am pleased to see her work grow and grow. Below is a sample of her work.
FacebookTweetEmail

Artists on Facebook are challenging one another to post three images a day for five days. Artists are suppose to invite a new artist to post each day and they will follow the same rules. This is like the ice bucket challenge (i.e. peer pressure challenge) for artists. I will thank New Mexico based painter Scott Anderson and book artist Jeff Abshear (he is the director of the Kalamazoo Book Art Center), for this opportunity to plaster Facebook with odd pictures. At least I am assured they will enjoy my pictures and may be pleased that the challenge is alive outside Facebook. Also, one of the advantages of not being on Facebook is that I can curate my peers into this post. The following are examples by Anderson and Abshear:

The theme I chose for day on are “car” paintings. Specifically, the cars I have owned. Some say “you are your car”. In other words here are three (or four) self portraits.

As part of this challenge process, I chose Dawson Weber to next take part in this challenge. He is one of the few artists I know living in L.A. who also is a Midwesterner through and through. Go Dawson!