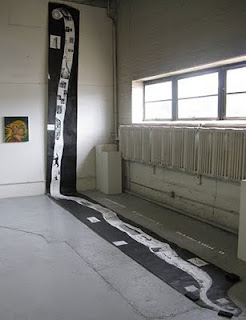 Currently, I am exhibiting artwork at the Kalamazoo Book Arts Center in Michigan (August 6 – 27th). Included in the exhibit is a thirty-two foot long drawing of a scroll.

In 2003 or 2004 I had bought a roll of paper. Having not used it by 2005, I thought about the possibility of making the entire roll into one long drawing. At that point, I didn’t know how long the roll was or how long it would take to use all of the paper. This summer I was able to measure the drawing and for the first time I was able to see the finished piece at one time.

When trying to comprehend a work that is very large and or sculptural, it requires multiple views to piece together a sense of the whole work. For this reason, I took multiple photographs to document this work.

The drawing was completed in three different stages. At each stage I would work on a section for a particular exhibit. During the first stage, I completed a part that was included in an exhibit at the Pennsylvania College of Art. 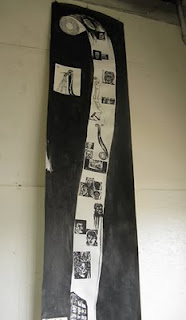 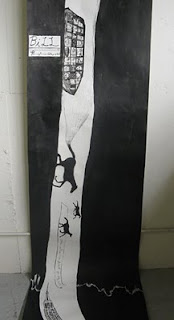 I continued work on the scroll for the exhibit “Naked Paper” at Tower Gallery in Philadelphia (Tower Gallery is now closed). For this part of the drawing, I depicted many large towers. 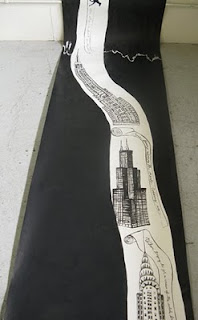 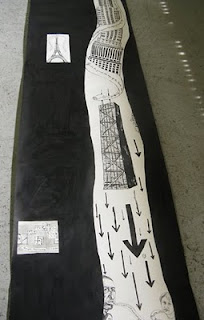 I completed the last part for the exhibit “Dig” in the Washington D.C. area. The gallery had only enough space to exhibit the last section. The last part is comprised of a collage related to the “Dig” exhibit as well as depictions of well-known people spewing forth quotations or aphorisms they are known for. 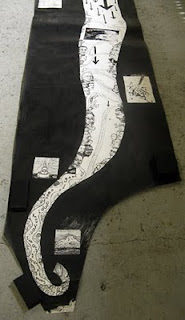 By the time I had the chance to show the entire scroll in Kalamazoo I had only a few corrections to make. For me one of the biggest surprises of this project was the shape at the beginning and end of the roll of paper. I don’t think the manufacturer considered that artists would use these parts. 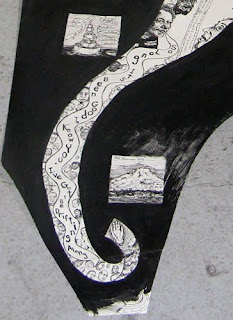