(For more information about the “Viewfinder Project” click here.)

When I received a “viewfinder” back from Tom Baker, what I got was a bomb in the mail. As a greeting, Baker’s card is a paradox because the image is both menacing and beautiful. The background indicates a elegantly nuanced world of repetitious pattern. It seems unlikely that the world, as depicted in the background, will be shattered. Although we will never know if the bomb depicted will explode (we only know it appears to land in water), it reminds me of nuclear tests where bombs were dropped on the ocean. Ultimately, I do not see Baker’s bomb as threatening. Rather, I view the image as a metaphor for explosive questions that have a revelatory quality and I became it’s target. 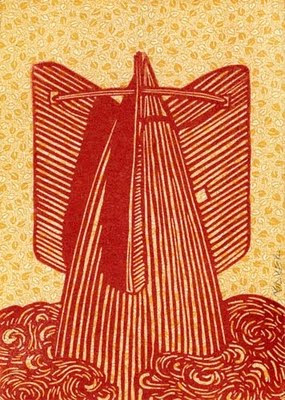