The idea of breaking records rarely holds my interest (particularly feats of strength and speed). Attempting to break records can at times feel like an exercise in striving to best others at narrowly defined achievements. Without a higher sense of purpose, efforts can feel like a misplaced use of energy. Despite my misgivings, I will delve into a small personal record. I will continue because an attempt to reach lofty goals can yield redeeming results (e.g. truth or service).

With this current post, I will have broken my record for most posts in a year. At the beginning of the year I declared a renewed work ethic and commitment to write and post. I did not know how long this resolution would last. Thus, it came as a surprise that I had brought a higher than expected level of dedication.

Breaking records serve as markers and can allow us to be reflective about setbacks and surprises while also allowing us to consider how to move beyond abstract points of completion. Pushing myself toward the finish line and the end of 2014, I made one of my “assignment” drawings. In order to not lose sight of the fact that I am student, I set a time limitation one would have for a studio art class.

I gave my self about three hours to come up with something that approaches resolution. The results are not always as fine tuned as I’d like. However, a little pressure is felt and occasionally I end up in a very different place than I thought I would. In memory of a watercolor by John Ruskin depicting a large stone/boulder, I decided to draw my own “bolder” (seen below).

As it turns out, a bolder approach sometimes can be record breaking. 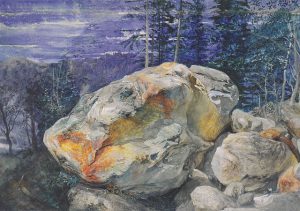 Above is an image of John Ruskin’s watercolor Fragment of the Alps. However distant in style and approach, below is my own drawing of a large Stone. 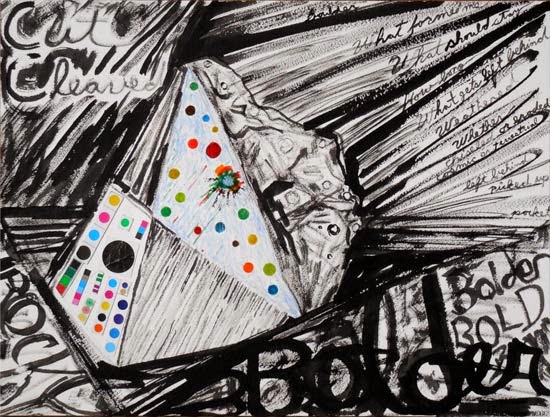